It has been another busy and successful time for members of our Research Group which has included two published papers, an award of a major NERC grant, two published abstracts, a visit to the Mountain Pass carbonatite mine in California, two mapping expeditions studying carbonatite complexes in Angola and Greenland, a project into the B-NMR of coral and attendance at four international conferences. We are also now advertising for two postdoctoral fellows to work in biomineralisation.

Adrian is part of a team that has landed a major NERC (UK Science funding body) grant to study biomineralisation in corals. The project entitled “Trace element and isotope partitioning in carbonates in simulated biological environments” and is being led by St Andrews academic Dr Nicola Allison, along with colleagues at the Universities of York and Glasgow. Adrian is contributing expertise in the characterisation and analysis of minerals, drawing upon his experiences in synchrotron and spectroscopy. The award is valued at ~£0.56M and will employ a postdoctoral fellow at St Andrews University. Applications for this post, and a second postdoctoral fellowship on another grant, are now open.

Anouk and Nicky attended the Annual progress meeting in Brighton.  Nicky presented her work on luminescence of REE minerals and applications for smart sorting. Anouk presented new results on her work related to WP 1 to 3, on the mobility of REE during alteration of eudialyte, and new insights on REE substitution in eudialyte and ion adsorption clays from synchrotron measurements. 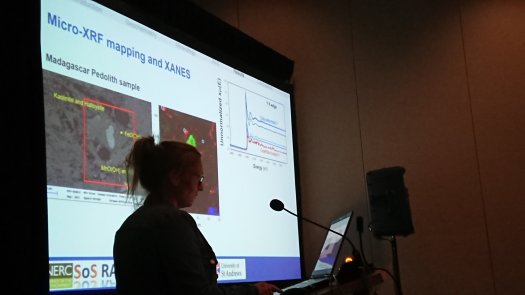 Will Hutchison took part in a three day workshop developing Geomodels for alkaline mineral systems. The workshop, hosted by the Geological Survey of Denmark and Greenland (GEUS), brought together experts from academia and industry to discuss the processes that enrich magmas with critical metals and form economic deposits. He presented briefly his work on the sulfur isotope evolution of alkaline magmatic systems.

Adrian Finch and Nicky Horsburgh attended this year’s Society of Economic Geology meeting in the mountains of Colorado. The conference had a special theme of exploration for critical metals and attracted several hundred delegates from across academia and industry. Nicky presented her poster presentation “Luminescence as a Smart Sorting Tool for REE Minerals” which was discussed with several of the technical companies presenting at the conference. Adrian presented a poster on the mechanisms for critical metal enrichment of the mantle as a tool to understand the spatial and temporal distribution of critical metal deposits across the Columbia supercontinent.

Eight of the research group have been involved in activities in the Field over the summer.

Adrian and Nicky were one of a few academics allowed access to the Mountain Pass Rare Earth mine in California. Mountain Pass was the world’s largest rare earth producer for many decades but has been eclipsed in recent years by production in China. The visit was part of a field course organised through the Society of Economic Geology. More details are in the blog.

We had two teams of undergraduates mapping and sampling over the summer. A team of four (Austin Scherer, Curtis Rooks, Anthony Clarke and Angus Watson) are worked on carbonatite and lamprophyre-cemented breccias north of Narsarsuaq in Southern Greenland. Carbonatite breccias are often hosts for unusual rare element mineralisation and these particular breccias are unstudied since their discovery in the 1960s. The work was partly supported by a grant from the Mining Institute of Scotland Trust.

Two students (Geraldine Tchimbali and Antonia Santos) studied a section of the Tchivira/Bongo carbonatite complex in South West Angola. Tchivira-Bongo is a syenite-carbonatite complex related to Cretaceous rifting which extends into Namibia and Brazil. The students have brought back a sample suite that will allow us to carry out the first detailed studies of the region for a number of decades.

PhD student Josh Hughes (enrolled on an Iapetus studentship between Durham and St Andrews Universities) worked over the summer for Mkango resources on the drilling of the Songwe carbonatite project.

Joint Chemistry-Geology student Hugo Heard has joined the group and has been working as part of a collaboration with the members of the Centre of Magnetic Resonance to study the substitution of boron in inorganic and bio-minerals. He has been working with Dr Daniel Dawson and Professor Sharon Ashbrook of the School of Chemistry at St Andrews to constrain B, H and F NMR data in a range of B-bearing minerals including meyerhofferite and fluoborite in an attempt to constrain structural disorder and defect coupling. The project is looking at these boron minerals initially to pave the way for a more comprehensive analysis of coral aragonite, into which B substitutes at trace levels. The data on fluoborite are incomplete, but indicate substantial structural disorder. 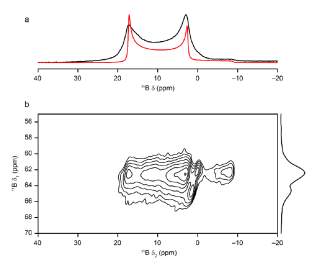 Tweets and Websites by Group members

You can follow Nicky Horsburgh who has also been tweeting on her activities including SEG2018 and the visit to Mountain Pass. Anouk has just launched her website: www.anoukborst.com.